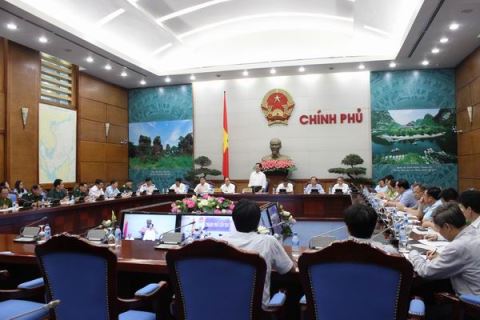 At the conference, on behalf of the Agency Standing 389 National Steering Committee, Deputy Finance Minister Do Hoang Anh Tuan statement of implementing Directive 30. Accordingly, the fight against smuggling, drug trafficking contraband tobacco was initially achieved positive results. However, prices of foreign cigarettes on the market increases, so the objects organized cigarette smuggling from abroad to Vietnam make the situation at all levels, a key area for signs of increasing and unpredictable and risk flare up again.

At the conference, local authorities also agreed with the solution that Deputy Minister Do Hoang Anh Tuan proposed. That is, ministries, sectors and localities to continue the thorough and strict implementation of the Directive 30, especially in key areas online should develop thematic plans, specializing in large projects to fight and repel active cigarette smuggling in the province.

At the same time, advocacy, campaigning to raise awareness of people about the harmful effects of tobacco smuggling on public health and the loss of revenue for the State budget; mobilize people to “say no to contraband,” and in response to the campaign “The priority for Vietnam Vietnam.”

Ministry of Industry and Trade in coordination with the ministries concerned to urgently amend and supplement Decree 185/2013 / ND-CP and the Joint Circular No. 36/2012 / TTLT BCT-BCA-BTP-BYT- SPC-VKSNDTC. Delegates unanimously to increase sanctions proposal, reducing the number of smuggled cigarettes, trafficking, transporting 1,500 bags to 500 bags to criminalization to ensure black commandments and expressed determination to carry Directive 30.

The police force was involved handles hundreds of cases, thousands of cases prosecuted. The reason is that profits from smuggling activities and production in countries with the price difference. When cigarette prices in high water on the foreign cigarettes from entering.

On the other hand, the coordination between the forces, local authorities have not really mount; Untreated thoroughly instigator. Ministry of Public Security proposed to modify the text, sanctions and tax policies to promote the dissemination of the harmful effects of cigarette smuggling; Additional funds against the harmful effects of tobacco to buy equipment to support …

Addressing the conference, Prime Minister Nguyen Tan Dung praised the efforts of the forces who have served, serious deployment, focused direction Directive 30. This was reflected in the results start keep contraband tobacco than cigarette market share in the market high.

Consensus with the solution of 389 National Steering Committee, the local, the proposed force, Prime Minister Nguyen Tan Dung stressed that the Government has always considered the fight against smuggling is a task often deployed frequently, have been prevented with contraband, boosting domestic production, economic growth, resolve difficulties in employment.

Hence the need to concentrate forces struggle to prevent and push back up smuggling, protect domestic production, improving people’s lives and contribute to increasing budget revenues. Recognizing the importance of this work, the head, the leader of the unit, the localities should uphold their responsibilities, to fulfill the tasks assigned. Local leaders to direct the forces coordinated, centralized functional departments to inspect and oversee implementation to reduce smuggling.

The Prime Minister also suggested that the National Steering Committee 389 required more drastic in directing and operating the combat against smuggling and trade fraud, including the fight against cigarette smuggling. Functional agencies and committees, local governments must implement synchronization solutions, how to focus on the object hit leader, mastermind.

To do good is the task assigned, the forces should focus on the education of officers and soldiers, prohibit acts of abetting smuggling activities;advocating people, especially the younger generation of anti-smuggling and anti-counterfeiting, commercial fraud; improve the quality of domestic goods production, reduce costs; research trends, meet the requirements of the people.

Excluding the quality and price of goods produced in the country will increase smuggling. The Government is very concerned, facilitate encourage promote domestic production. Smuggling of cigarettes to make drastic right from the border, combined with the recruiter from the inner compartment.

Prime Minister asked the National Steering Committee 389 additional effective solutions to the Resolution of the Government, to do so put the work more effectively against smuggling, protect domestic production, create jobs, food safety, anti-corruption and negative phenomena in the apparatus.